We started a little tradition with my husband’s family where we take a trip every year around Christmas. Last year we went to Disney World and this year we stayed much closer to home and headed to Branson. I posted about our Summer Trip to Branson last year and the city is so much different in the summer than it is in the winter. One of the main attractions in Branson is Silver Dollar City, and they do a huge Christmas celebration but we opted out this time since it’s outdoors and temperatures were in the single digits. I’m so glad we decided not to it was so painfully cold.
J stayed behind to get a few work projects wrapped up and we definitely missed him. My mother in law, brother in law, and niece rode with me and the boys and it took us the full 4 hours due to some ice we had the day before we left. We also met up with J’s aunt and uncle who drove up from Arkansas.
No trip to Branson is complete without a stop at Lamberts for lunch and while Jack enjoyed eating the hot thrown rolls, he was not a fan of catching them. 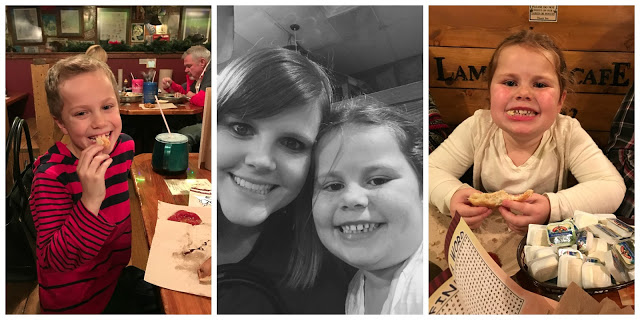 After lunch we made the short 30 minute trip from the restaurant to our hotel. We stayed at the Holiday Inn Express on Green Mountain Drive which is right off hwy 76, the main road through town. I’ve stayed at several hotels in Branson over the years and this one is by far one of the best for the price and location. I love me a fancy hotel, but for a quick vacation with kids this hotel gets the job done. The pool area is especially awesome and there’s a lounge area and sauna for those who don’t want to swim.
By the time we got checked in and unpacked it was already dark so we headed out to The Shepard of the Hills to see The Trail of Lights. We were so sad when we got there and they were closed due to weather 🙁 We made the best of it and went to another drive thru light display and while driving back to the hotel we just happened to run into Santa himself and his trusty reindeer Vixen. 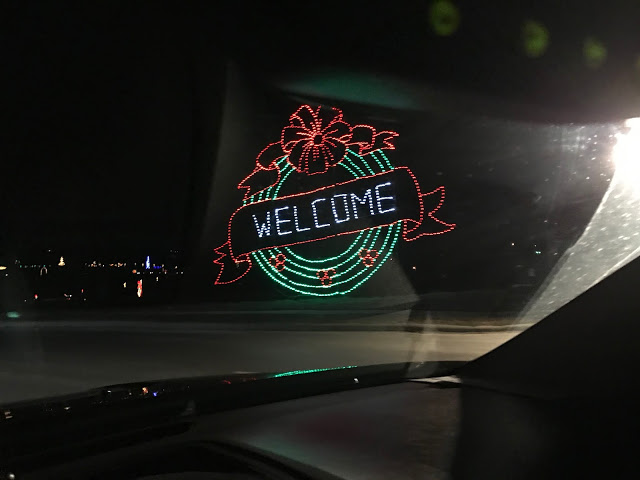 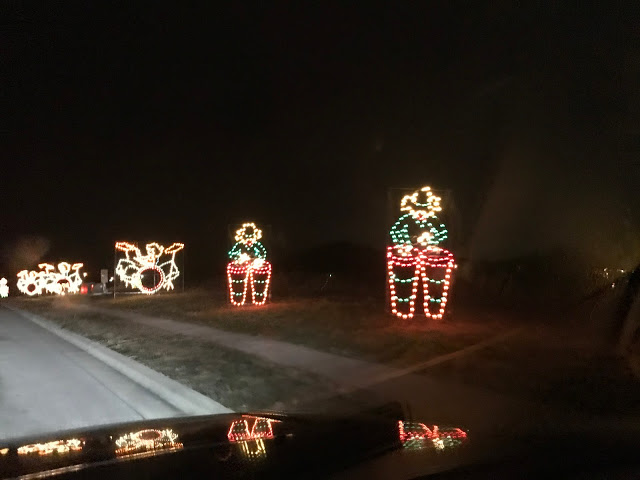 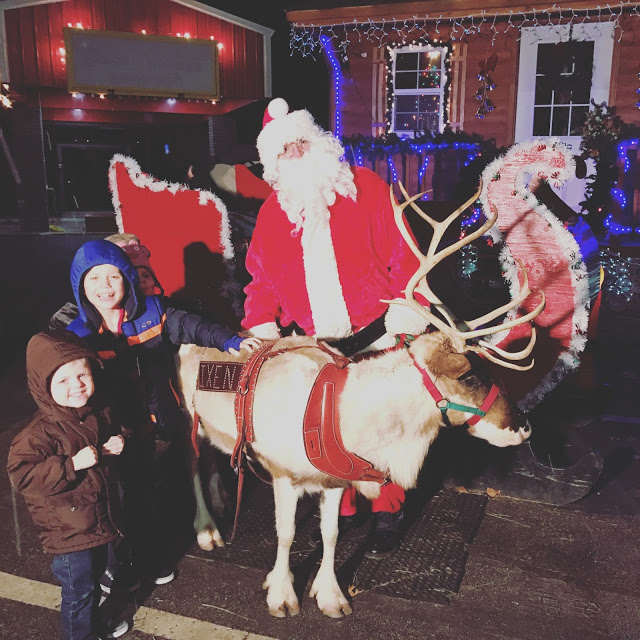 While talking with Santa it started to snow which was the perfect Christmas moment that we wrapped up quickly since it was 1 degree. Back at the hotel the kids swam and we ordered pizza for dinner. This was probably the kids favorite part and we joked that we could have stayed home and gone to the local rec center and they would have been just as happy. Go figure. 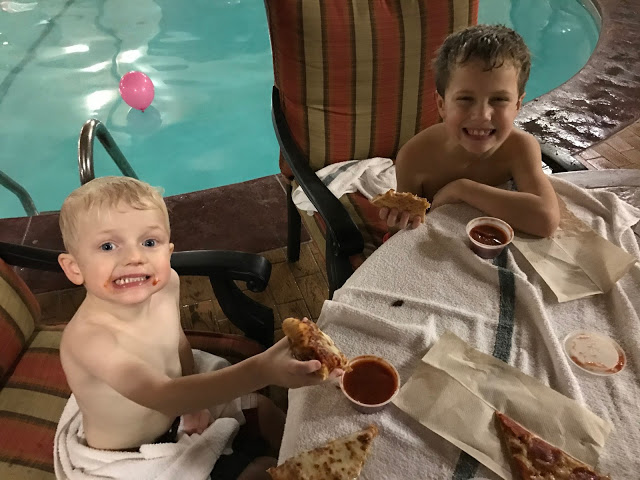 We woke up to about an inch of snow on Sunday morning and braved the steep, curvy roads up to the Chateau on the Lake to check out their famous gingerbread villages. The hotel itself was beautiful and like the name suggests, right on the lake. The kids loved that the hotel had a glass elevator and I think we’ll have to stay here during our next visit.
Don’t you just love Jack’s excitement for life 🙂 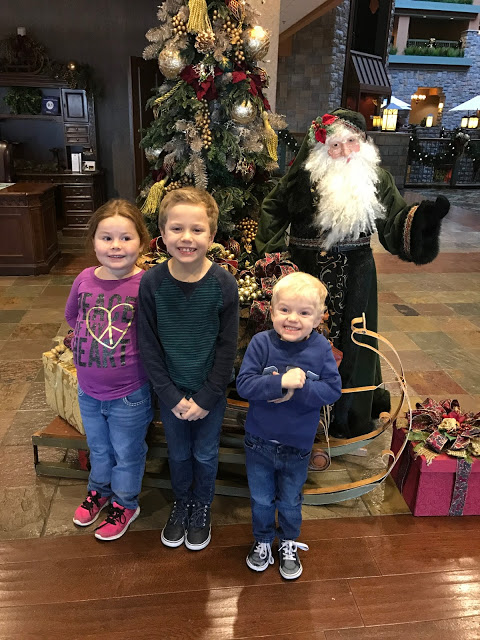 Hotel lobby and if you look closely you’ll notice the man in the red suit. 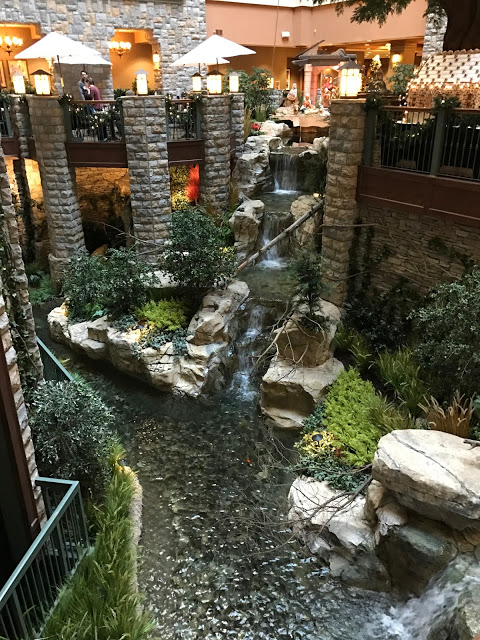 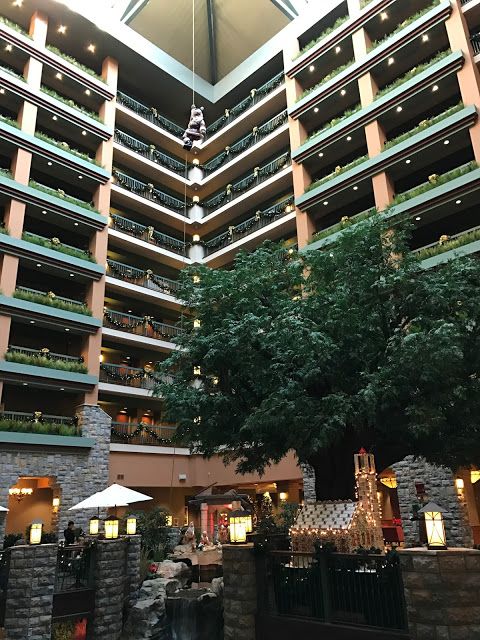 The gingerbread houses were enormous and so intricate. Lots of the houses used PopTarts for shingles on the roof and they definitely put our measly little gingerbread village at home to shame. 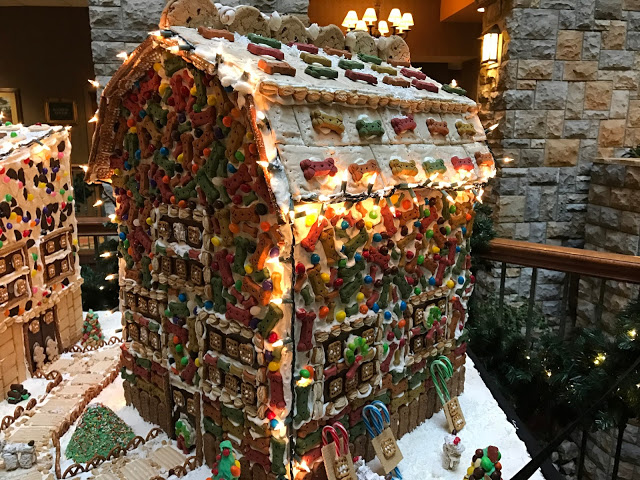 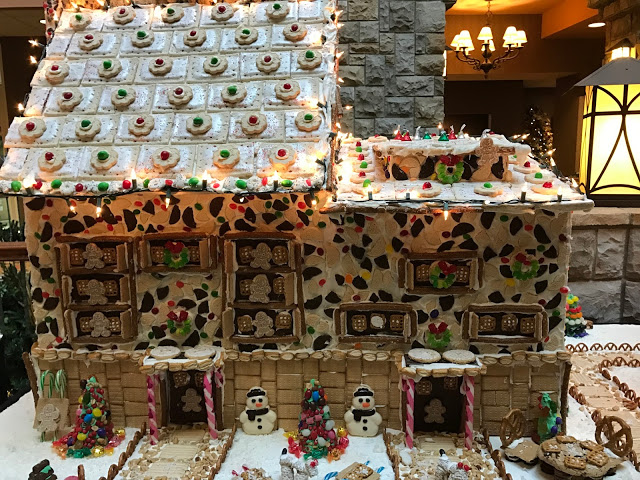 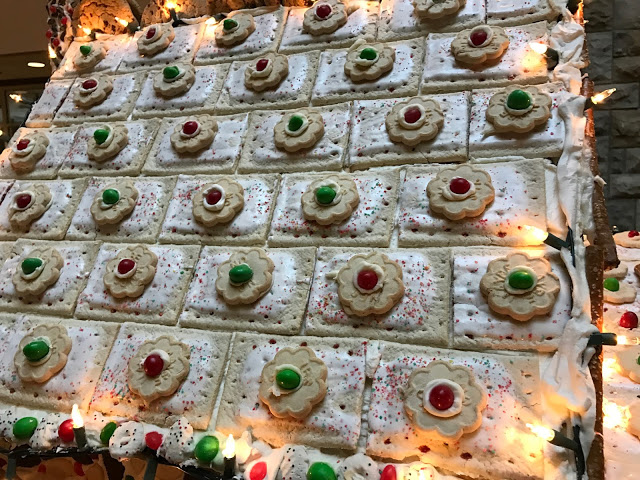 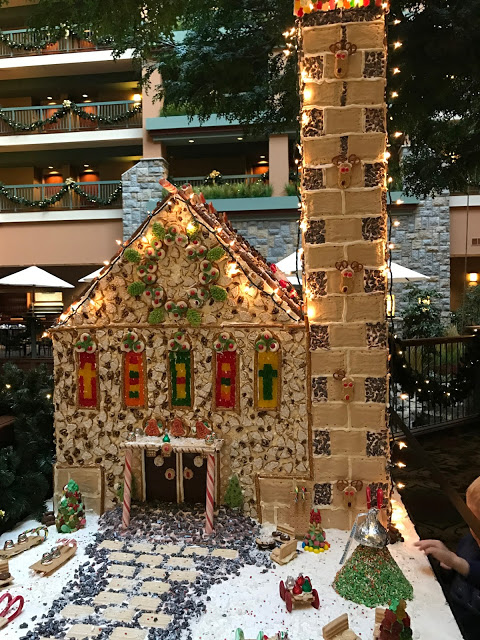 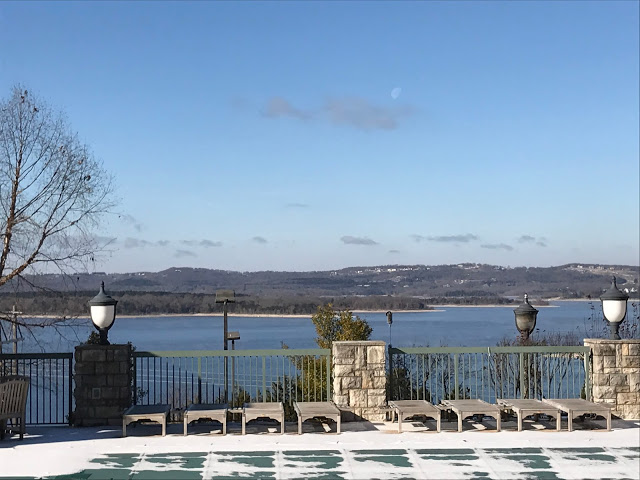 After lunch Ben went back to the hotel with his uncle and cousin to swim and Jack and I went with J’s mom, aunt and uncle, to an antique mall and craft fair where I picked up this adorable buffalo checked infinity scarf. 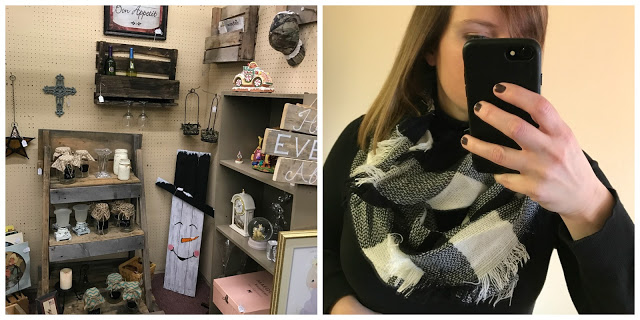 Sunday evening we had tickets to Dolly Parton’s Dixie Stampede and instead of the usual show it was Christmas themed. Although the show is pretty cheesy, this is one of my favorite things to do in Branson and the food is delicious. Plus, it’s fun to have to eat with only your hands. 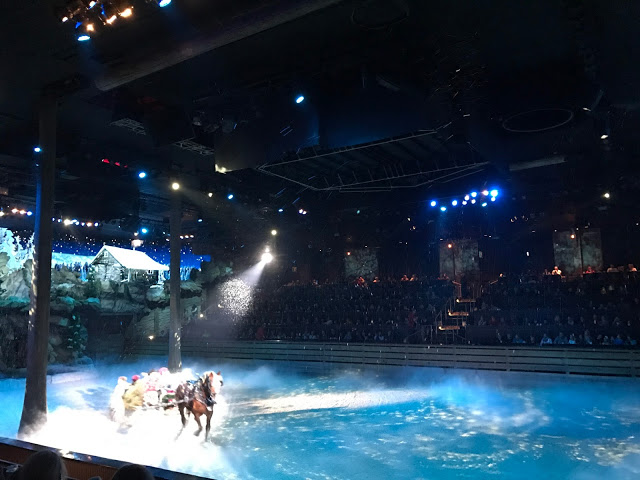 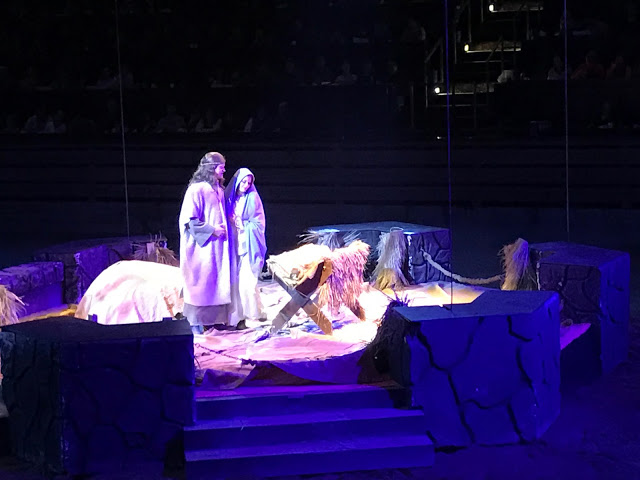 Monday morning we said goodbye to J’s aunt and uncle before heading to Wild World. My brother-in-law spotted this place and it was our first time going. It’s definitely interesting and is an aquarium/zoo/mini golf/arcade. They had the most random assortment of animals from snakes to sharks to wolves. Overall the kids had fun, but it was pretty pricey and we probably wouldn’t go back in the future. 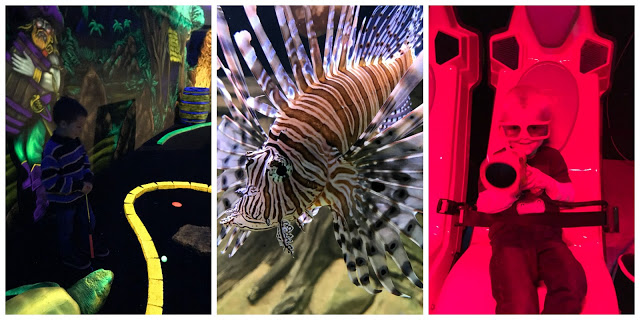 After one final stop at Krispy Kreme to grab a dozen glazed for J, we made the trek home and I may or may not still have a few things that I haven’t fully unpacked. We’ve been back 8 days. Whoops.
Christmas recap coming at ya tomorrow. 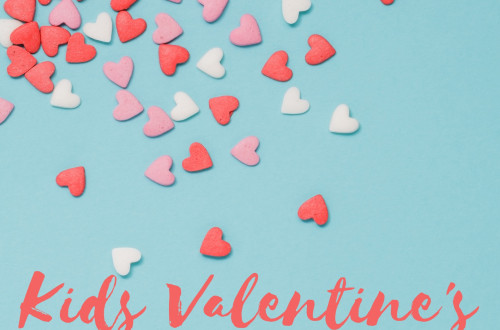